2018-06-26 :: naxxfish
#everydaycary  #headphones  #audio
As someone who works in audio, I appreciate a good quality set of headphones.  I am, by no means, an audiophile – I’m an engineer. I want my products to operate within tolerances that are suitable for their purpose – I’m not up for cryogenically freezing my cables or painting my CDs with green pen, or indeed any other magical tweaks to get marginal gains, at best.

But I do want something that will serve me well, and be comfortable doing so.

For a long time, I used to rock a pair of Sennheiser HD-25: headphones designed to attenuate the sound of the sonic boom on Concord and were only released to the public after it turned out that many House DJ were getting hold of them, who, as it turned out, were quite into the high levels of isolation they had.  They were really handy for the kind of stuff I was doing back then – monitoring broadcast mixes in loud environments, sound checking bands, that kind of thing.

These days, I don’t have quite such stringent requirements – and as great as the HD-25’s are, on-ear cans tend to get a bit uncomfortable for me for long periods of time.  However, I have retained the penchant for full-bodied bass.

Thus, my audiophonic journey led me to Beyerdynamic. Their DT100 were almost ubiquitous in the UK’s radio industry at one point (and still have a pretty big presence today), and notable by the fact that every component of them can be replaced. Earlier in my career as a broadcast engineer, I spent a fair time doing just that.  From the drivers to the cable to the headband to the internal wiring, each piece will have a part number and you can replace it.  The problem, for me, is that they were uncomfortable and sounded … well, pretty rubbish if I’m honest! And I couldn’t help feeling like if I were to go out wearing them, I’d look like Alan Partridge

But on the positive side, they company have a slightly sleeker brethren, the Beyerdynamic DT770 PRO, used by hundreds of musicians in recording studios, favoured by pop radio stations – and frankly, if they’re good enough for Trent Reznor, they’re good enough for me.  In all seriousness, they have a fairly flat frequency response 20Hz-20kHz with a bit of a bump at the top and bottom, and have excellent isolation properties.  And, importantly, I know how they sound, so can evaluate audio with them pretty well (distinguishing the sound of the cans from the source material).

So, good starting point. And, they also offer 80 ohm and 32 ohm versions which make them more suitable for use with mobile devices and consumer kit (which would struggle to drive the 250 ohm versions on their own which are the pro standard). Admitadley they’re not the same drivers any more, but they’re fairly close.  So, I go for a Beyerdynamic DT770 Pro 80 Ohm (yes, this is an affiliate link)

The stock cable is fine, but sometimes the minijack connector doesn’t fit into phones, the cable is too long, or is in some way inconvenient. So I decided to modify the headphones to make the cable detatchable.

This is a pretty simple modification, once you get the hang of dismantling and reassembling these (and, as I previously mentioned, I’ve dismantled quite a lot of headphones)

Jason from customcans.co.uk shows you how to fit a mini-XLR connector in this video 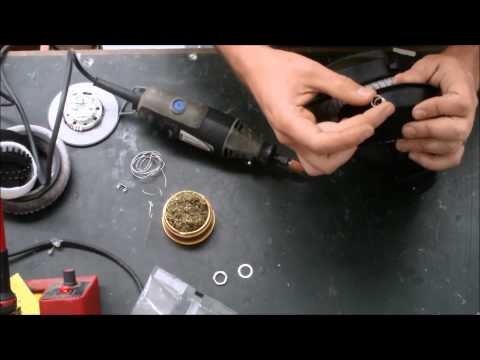 In my case, I instead went for a smaller 3.5mm minijack socket which required less intrusive modifications.

Clearly, I now need a cable for my headphones.  I could have bought one, but I decided what the heck, I’ll make that myself as well.

One of my favourite brands for flexible and rugged cable is Van Damme, and for headphones where you just need 3 conductors (ground, left and right), their Pro Grade Classic XKE 1 Pair Install Cable is thin and unobtrusive, but high quality. Although you shouldn’t really put left and right on a twisted pair, the distances I’m likely to be going with this (a meter or two, at most) means this is mostly a non-problem.

Historically, I’ve not been a fan of minijack connectors.  Give me an XLR or even a 1⁄4″ Jack to solder up, and I’m happy, but minijacks are just a bit fiddly for my liking.  Or that’s what I thought – until I discovered the Amphenol KS3PB-AU which is, frankly, a joyous thing to solder and assemble.  And, unlike crappy minijacks from Maplin (RIP), all of the terminals are actually connected when it comes out of the bag!

They look pretty swank as well.

To finish the cable off, partly because it looks nice but mostly because my cat would chew through it otherwise, some 6mm Flexo PET Expandable Braided Sleeving in Neon Blue, and

some 4:1 7mm blue heat shrink to hold down the ends.  A benefit of applying techflex is it makes it a lot more difficult to tangle.  A downside is that it does cause some minor microphonics when it rubs against things, but that’s no worse than many other headphone cables.

This is what I use to connect my cans to a PC or laptop.  I’ve also got a similar but slightly longer cable with 6.25mm stereo jack at one end, sleeved in white techflex, just in case I find myself needing to hook into some slightly more pro kit and need a bit of space to move.

Finally – I have a problem that my Pixel 2 does not have a headphone port, and I’ve not had much luck with the Google USB-C to 3.5mm stereo adapters. So I decided to go Bluetooth, and got myself a SZMDLX Bluetooth reciever (yep, that’s certainly a jumble of letters right there!) which seems to do the job, and can be clipped to the headphones quite conveniently

I also made a shorter cable with a right angle Neutrik minijack (eugh) to hook this up, as the one which came with the item became faulty in a matter of days.

Finally, after sweating into the stock earpads for a fairly significant amount of time, I decided to get some Brainwavz Round Pads in a  black PU Leather finish.  And, for me, this is a significant upgrade as it provides a better seal around my head (and glasses!) and helps stop the bass from escaping.

So there you have it, a guide to my headphones that nobody asked for but I wrote anyway!